I apologize for making this blog so late. TBH I kept going to write this post and failing to have the words lol.

Seeing “Sailor Moon R The Movie” in-theatre was AMAZING. The day started out with meeting a few members of my Sailor Moon group (Edmonton Sailor Moon Fans) in the mall food court for some Usagi-esque food (crepes, ice cream, or, in my case, bubble tea ^^;). We sat and talked for a bit about everything that’s happening with Sailor Moon, some of the funny things happening in the new dub, and whether people were enjoying it.

Then… it was TIME!

We lined up for the movie around 5:30-6ish, and got there JUST before they handed out the posters. Unfortunately, the last poster was given out to the person directly in front of myself and my friend Christy. TBH, I’m still bummed about it. We got there that early specifically for those posters, but you win some, you lose some (I’m still looking to buy one if you’re selling!). At least when it was time to go in we were guaranteed a postcard and an envelope as there were multiple MASSIVE stacks.

What was really fricken awesome was walking into a theatre and seeing “Sailor Moon R 7:00” across the sign, and a digital Sailor Moon poster on display. Something we’ve never had the opportunity to see in North America in the entirety of Sailor Moon.

So into the theatre we went with 30 minutes until start! With so much time on our hands, we found seats and cracked open our envelopes to work out some trades.

Turns out, basically everyone in the theatre got Moon, Venus, or Jupiter. Guess who I got?

And I couldn’t find a single Sailor Mercury to trade with. That was super disappointing, but oh well. I LOVE the advertisements that came with the postcard, though. What no one is talking about is that the postcard is on really nice card stock! Same with the postcard version of the movie poster that came separately. Also despite what staff said, the two movie poster advertisements ARE different! Here are some pictures of the fronts and backs of the cards below. 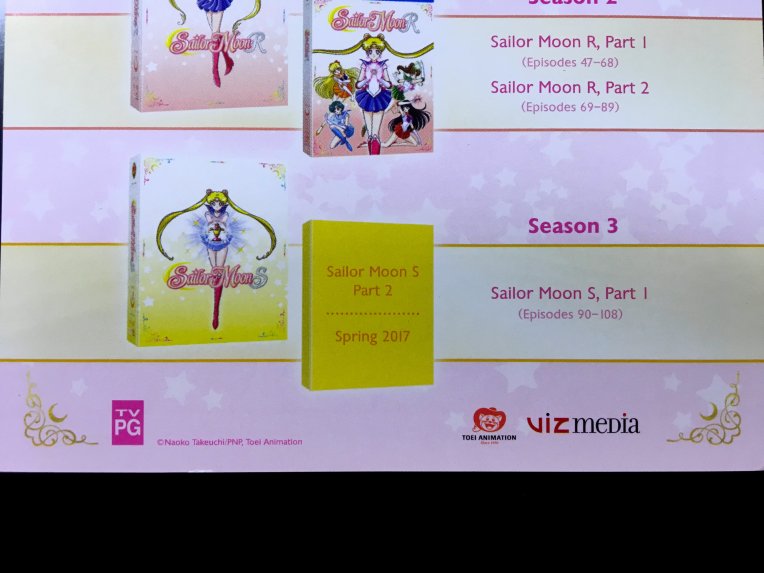 SURPRISE! Something no one seems to be talking about is that the back of the glossy advertisement gives us a time frame for Sailor Moon Super Part 2 on DVD and Blu-ray.

Then the lights dimmed, the crowd got quiet, and instead of the expected short, we got a small interview from the voice actors of Tuxedo Mask (Robbie Daymond), Fiore (Benjamin Diskin), and Sailor Moon (Stephanie Sheh). They were adorable and talked about their favourite parts of the movie without being spoilery, and how it felt to be a part of a series with so much behind it.

But to be honest, I don’t remember most of it because I was too busy laughing at Robbie Daymond’s sweater.

Oh yea. That suckers covered in ROSES. Of course it is.

Then FINALLY, Make-Up! Sailor Guardian began. It was from that point on that there was hardly a dry eye in our entire row.  We’ve all been fans since childhood, and seeing Sailor Moon look so beautiful on such a MASSIVE screen was everything we had ever dreamed of.

Let’s be honest, Sailor Moon was animated over two decades ago. Not everything held up to being BLOWN UP to the size of a theatre screen, but that’s acceptable. We’ve all witnessed some of the bad animation still show up on our small parent-approved bedroom televisions. It wasn’t going away.

But the colours, the characters, the love put into making the redub of Sailor Moon R The Movie was very apparent from both TOEI and Viz Media. I’ll be honest, I’ve been trying to keep up with the Limited Edition box sets from Viz and Rightstuf, but since I moved out a year and a half ago… that hasn’t been so easy. On top of that, I now have a whole bunch of new responsibilities, and I haven’t even managed to watch them aside from what I caught during the showing of my own Blu-rays during the International Sailor Moon Day that I hosted during Animethon last year.

Based on that, I was very impressed with what I saw from Sailor Moon R The Movie. Everything was cleaned up nicely, the voice actors were wonderful, and it took me very little time to adjust to hearing them as their characters (though I supremely missed the old VA’s out of nostalgia for sure). Seeing the iconic kiss between Mamoru and Usagi that saves Usagi’s life so beautifully preserved was my breaking point. When the movie comes out in April I very much doubt I’ll be able to watch to that point without crying.

If you couldn’t tell, I had an AMAZING time at Viz Media’s showing of Sailor Moon R The Movie, and I can’t wait to see the next one!