The bag charms released in 2013 were some of the first accessories we seen from the 20th Anniversary. They featured a string of the Inner Senshi symbols accompanied by the Crystal Star compact, the Crisis brooch, and a Pluto/Chibi Usa themed piece featuring a Time Key, Chibi Usa’s compact, and a star featuring Pluto’s planetary symbol.

These are the official release photos 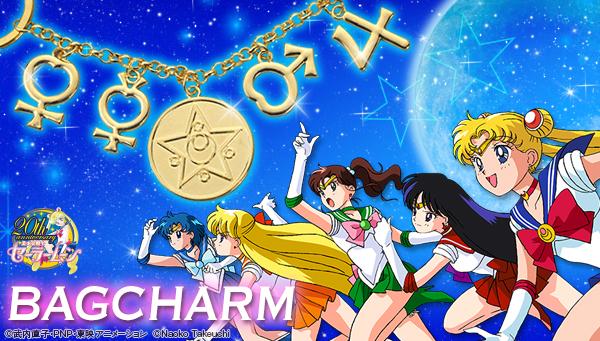 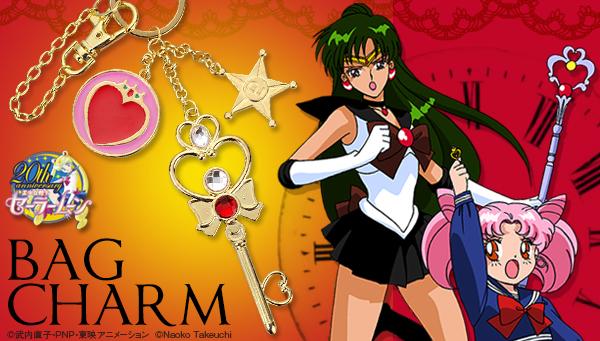 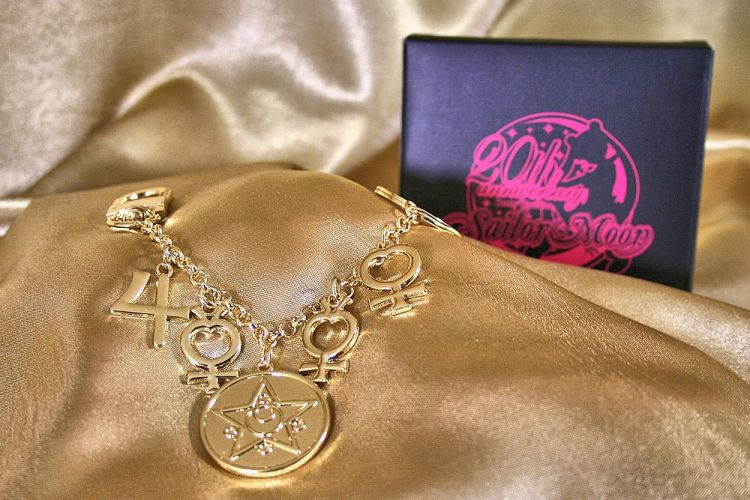 The Crystal Star bag charm is a cute chain containing the girls symbols, and a flat Crystal Star brooch charm. The design is simple, and even a little discreet as an anime merchandise piece.  My only complaint about the design is the charm placement. Mercury and Venus’s symbols are very similar, and it looks like they’ve placed 2 of the same charms on one side, even though they haven’t. If you aren’t against a little alteration though, it’s super easy to take a pair of jewelry pliers and switch the charms around.

My biggest issue with this charm set though is that mine came with a factory defect.

I have 2 Sailor Mercury charms, 1 Venus, 1 Jupiter, and 1 Crystal Star, but no Sailor Mars to be found =( I suppose back in 2014 when I received them I could have talked to CDJapan, but there were so many reports about them arriving with box damage, or surface scratches that I just didn’t want to mess with that. At that point these were one of the first signs we were going to get swamped with cool things though, and I just really wanted them lol.

The clasp on the charm isn’t the most secure. While it feels spring loaded I wouldn’t trust it on a bag that I use every day.  The opposite side is basically a really nice looking key ring. Though I think using it as one would mean scratching away the gold paint. 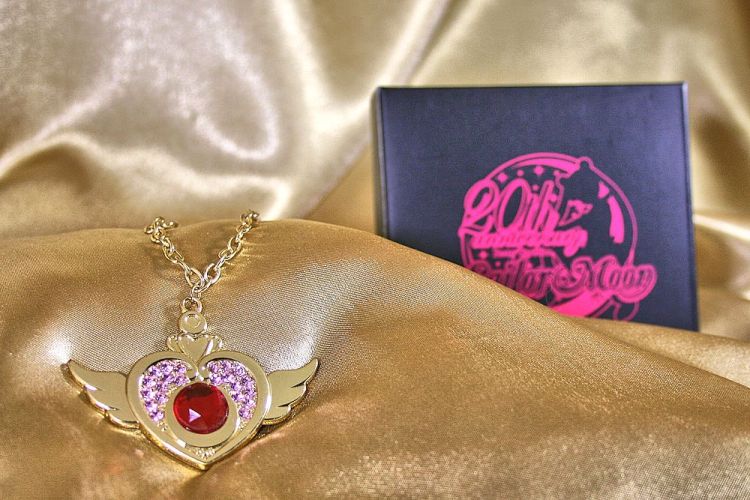 The details aren’t EXACT, but that’s a part of having something a little more stylized like this, and probably does a fair bit to help keep the price down. The little pink stones are placed perfectly though, and the center stone, while created with a different “cut” than the drawn piece, looks pretty spot on.

Each individual piece of this charm is beautiful, but I feel like as one set it’s the strangest out of the series. Pluto and Chibi Moon make complete and total sense, but I just felt like this didn’t quite work. It features a star with Pluto’s planetary symbol on it, a time key that Chibi Usa is given by Pluto, and Chibi Usa’s Prism locket. 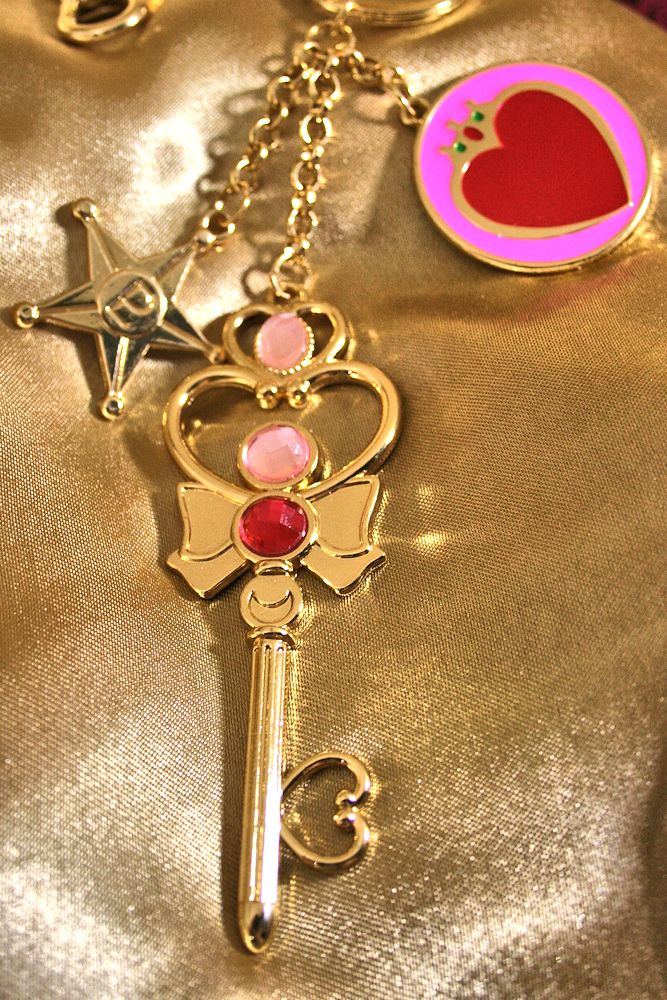 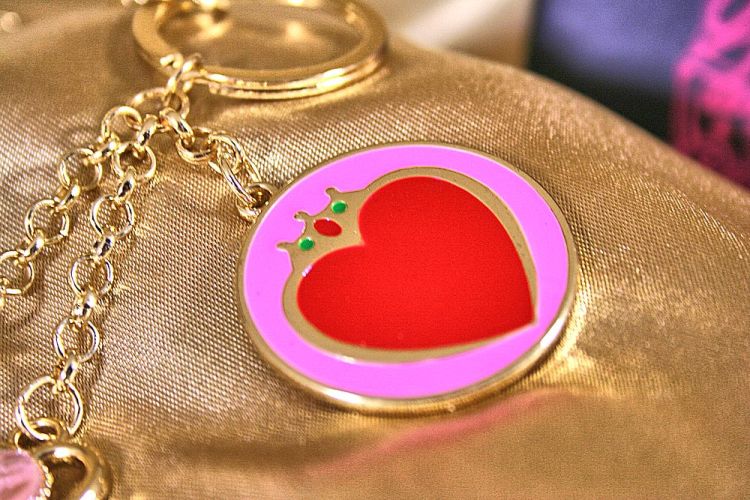 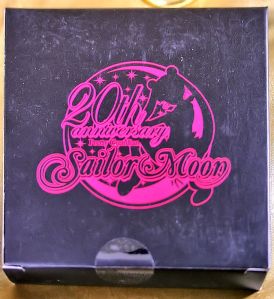 The boxes are very cute, but almost all of them arrived damaged in some way. Everything from dents, to surface scratches. The boxes for my charms aren’t as bad as the picture shows… this was mostly unfortunate lighting and a little bit of colour editing that brought out how many scratches there were, so I wanted to show it. Most of the issues will be visible, but not disastrous… though they may not be displayable if you strive for mint condition boxes.

The back of each box shows a black and white image of which charm is in the box, and contains the TOEI sticker.

These pieces are all very nice individually. It’s important to look for defects if you purchase any of them. There’s a good chance the box WILL be damaged, but I think your chances of getting one with the wrong charms on it like mine are very slim. I haven’t actually heard of anyone else with this issue (or I’d do some charm swapping lol).

As a collector, I say purchase the ones you like. These aren’t particularly well sought after, nor are they the most amazing quality or item to come out of the revival. They’re just a cute item, with minimal uses, and difficult to display qualities.

I am a Sailor Moon and anime collector, as well as an artist. View more posts